Early this summer I hiked from Paradise meadows (Mt Washington) to Wood mountain (Old Forbidden ski area), this was a trip inspired last year when doing another hiking trip I saw a sign indicating a trail over to Mt Becher which previously I had only been to in the winter. The hike starts off walking though Paradise meadows out towards Kwai lake. 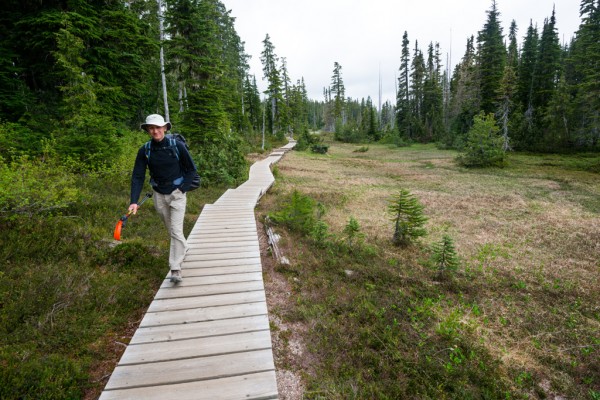 Easy walking along the boardwalks through Paradise Meadows

Stopping for lunch always somehow sends out a silent signal to let all the grey jays (whiskey jacks) in the area to flock to you. This time there where a number of juvenile birds that  seemed not only hound us for food but also the parents. 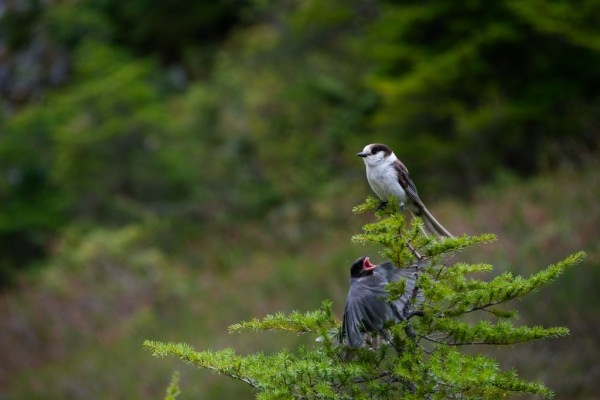 Once you are nearly at Kwai lake the trail gets a bit more adventurous, this is where you turn off of the established trails in the core area of Strathcona park and start to head towards our camp for the night at McKenzie lake. While the trail was clearly not traveled all that much it was still easy to follow despite the small snow patches. Even though the trail was clearly not maintained anymore it was still easy walking through a mixture of sub-alpine forests, meadows and past a number of streams, tarns and lakes. 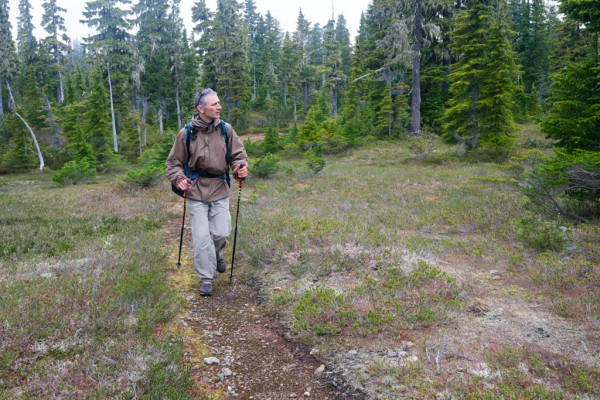 Before arriving at the McKenzie lake campground there was a real treat as we had to walk through a swampy meadow that had a number of wildflowers out in bloom which added a lovely splash of colour since the weather was rather dull. 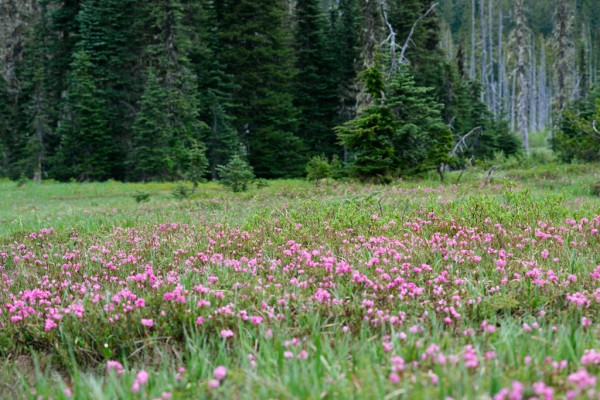 The campsite we stayed at is located on McKenzie lake but Douglas lake is only a short walk away and looked to have spots for a few tents. We had a bit of a cool wind coming off of the lake and seemed like Douglas lake would have been more sheltered from the wind but since we had already setup at McKenzie lake we stayed there.

Both of the lakes where bigger than I expected and similarly beautiful to other alpine lakes I had visited in the region. 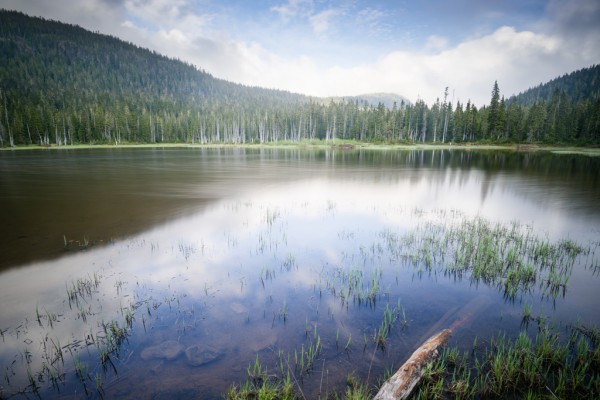 Looking out over McKenzie lake from camp. 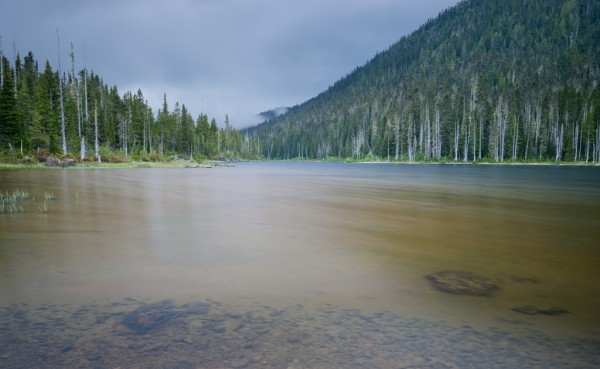 Looking down McKenzie lake to the further point from camp.

Although the weather had not been ideal on the first day there had only been some minor rain but starting early on day 2 that seemed to change. A rain storm soon settled in for most of the day as we hiked back to the car we had left at the Wood Mountain parking lot. Before leaving camp I spend a little big exploring and taking in some of the sights and scenes around the lake. 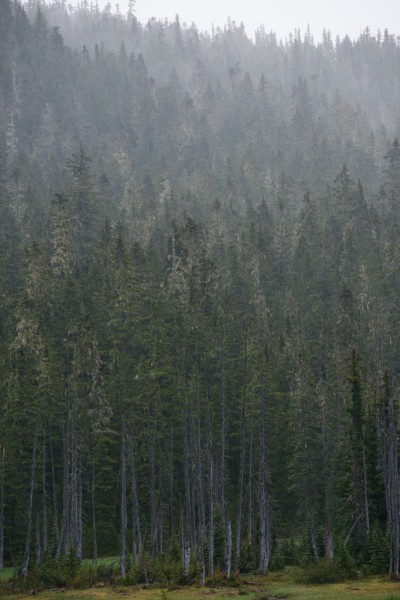 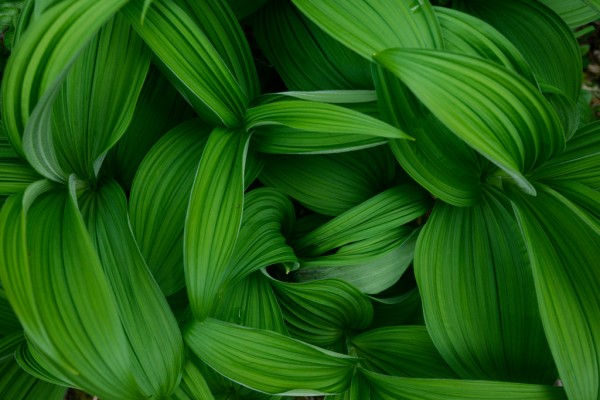 A nice cluster of Veratrum viride near Douglas lake.

Hiking out of McKenzie lake was one of the highlights of the trip as we enjoyed a brief (but welcome!) period of sunshine while we hiked through more of the meadow we had to hike into the camp site the previous afternoon. It did require some careful navigation and a leap or two to navigate some of the swampier areas. 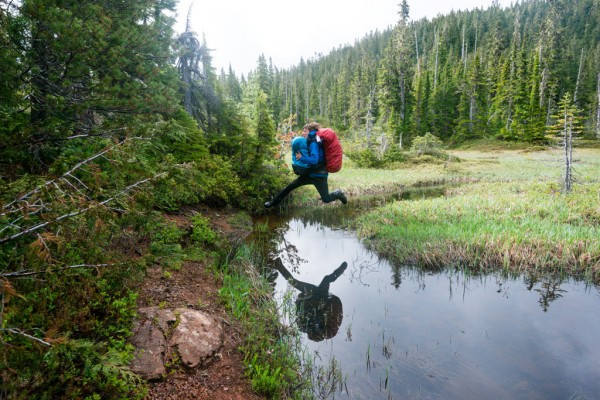 Kyle demonstrating his excellent sherpa skills while helping carry bags across one of the trickier crossings.

The remainder of the hike was done in rather poor weather conditions which resulted in a real lack of photos although the scenery certainly did not disappoint. After leaving the meadows outside of camp we quickly got into old growth forest that continued until we reached the old ski area. Hiking down the Mt. Becher trail was certainly interesting since I had previously only done it in the winter.

This was a wonderful one night hike that I would not hesitate to do again, I think the biggest downside to this is the requirement to juggle cars as you need to leave one at each trail head but in reality the drive between them is not that long. The first day was a little long (~16km) but the hiking was easy and mostly flat, the 2nd day was shorter in distance but did involve more up and downs until you reach the main Mt. Becher trail at which point is is pretty much all downhill until you reach the parking lot.

Here is a map to give an idea of the route and distances involved, the total distance covered was just over 27km (~16km on day 1 and ~11.5km on day 2) 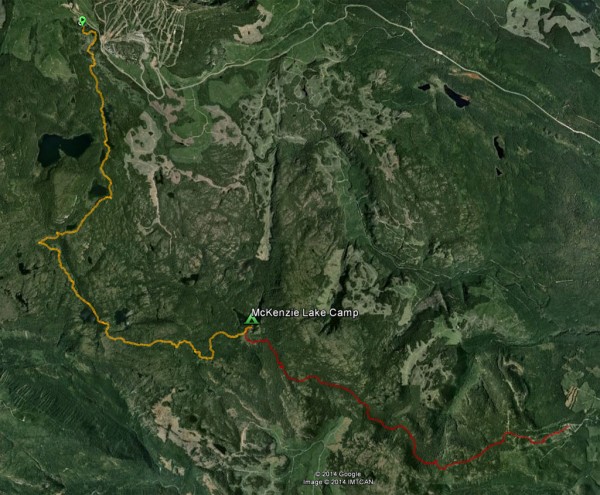 2 thoughts on “Hiking from Paradise Meadows to Wood Mountain”